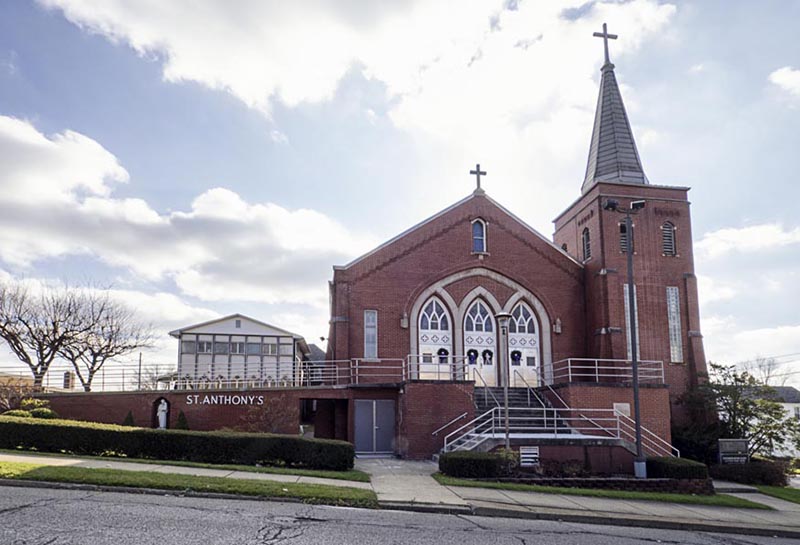 In recording the history of St. Anthony Church, you cannot help being impressed by the many social events that occurred over the years and the loyalty and goodwill that existed between the parishioners and their pastors.

Croatian Families were already in the Shenango Valley in the late 1800s. After many years of struggle and disappointment, Bishop Gannon appointed the Reverend Leo Medic, a Croatian Franciscan, pastor of the Croatian people in the area in 1924. The first church, which was constructed in 1925, was destroyed by fire. The debt-ridden, independent church was subsequently purchased and transferred to the Croatian congregation in 1929. But with the steady growth of the congregation, a new church was dedicated in 1938.

A school opened in September 1960, staffed by the Daughters of Divine Charity. The construction of the school in 1959-1960 was organized by the pastor Fr. Zoran Ostojic. A spacious playground for the school was purchased in 1962.  However, due to the economic decline in the valley between 1976 and 1989, the school was forced to close.

The church was completely renovated in 1964.

The gospel call to leave everything and follow Christ was the rule of Anthony’s life. Over and over again, God called him to something new in his plan. Every time Anthony responded with renewed zeal and self-sacrificing to serve his Lord Jesus more completely.

His journey as the servant of God began as a very young man when he decided to join the Augustinians in Lisbon, giving up a future of wealth and power to be a servant of God. Later when the bodies of the first Franciscan martyrs went through the Portuguese city where he was stationed, he was again filled with an intense longing to be one of those closest to Jesus himself: those who die for the Good News.

So Anthony entered the Franciscan Order and set out to preach to the Moors. But an illness prevented him from achieving that goal. He went to Italy and was stationed in a small hermitage where he spent most of his time praying, reading the Scriptures and doing menial tasks.

The call of God came again at an ordination where no one was prepared to speak. The humble and obedient Anthony hesitantly accepted the task. The years of searching for Jesus in prayer, of reading sacred Scripture and of serving him in poverty, chastity, and obedience had prepared Anthony to allow the Spirit to use his talents. Anthony’s sermon was astounding to those who expected an unprepared speech and knew not the Spirit’s power to give people words.

Recognized as a great man of prayer and a great Scripture and theology scholar, Anthony became the first friar to teach theology to the other friars. Soon he was called from that post to preach to the Albigensians in France, using his profound knowledge of Scripture and theology to convert and reassure those who had been misled by their denial of Christ’s divinity and of the sacraments..

After he led the friars in northern Italy for three years, he made his headquarters in the city of Padua. He resumed his preaching and began writing sermon notes to help other preachers. In the spring of 1231 Anthony withdrew to a friary at Camposampiero where he had a sort of treehouse built as a hermitage. There he prayed and prepared for death.

On June 13, he became very ill and asked to be taken back to Padua, where he died after receiving the last sacraments. Anthony was canonized less than a year later and named a Doctor of the Church in 1946.